A bunch of iSketch veterans got a bit bored with the standard iSketch games and decided to create a few of their own. Each game is described below. Mish Mash is another new game that incorporates all of these games into one, allowing the artist to choose the game rules for the current round. It may sound complicated but equipped with the info below it'll only take a few games to get the hang of it; soon you'll be playing the most fun and varied iSketch game there is!

Mish Mash allows the artist to pick the game rules for the current round.
The artist is given 3 words and must pick one that they will draw for the round.

The artist must do the following:

Note that there is one exception to these rules. If the artist has chosen Big Picture then they should pick at least two of the words as the answers.

Here's some guidance on how to set the room up

The artist sketches the answer as in any standard iSketch game.
Drawing normal should only be used as a LAST resort for newbies. They should in the first instance try drawing UD.

The artist draws the answer close up. For example if the answer is 'house', they may draw the front door, a window and part of the wall. This is a close up portion of a house.

Zoom is similar to Close Ups but the artist may zoom in (close up) or out (far away).

The artist picks at least two words and incorporates them into a single sketch. The sketch should not be two seperate images but both answers incorporated into one single image. For example, if the answers are 'pot' and 'beehive' the artist may draw a pot hanging from a tree branch, with bees flying around it.

Some players like to play Big Picture where guessing is not allowed until the artist hints. It is good courtesy to ask if this rule is in effect for the room before guessing.

The artist draws the answer as a bird would see it from above.

The artist draws what the answer would see. That is to imagine the answer has eyes and what it would be viewing from it's normal place in the world. For instance if the answer was 'mechanic' then the artist may draw a car engine with the car's hood up.

The artist does not draw the answer. Instead they draw the opposite of the answer. This does not have to be strict like hot & cold but may also include answers such as 'salt' with pepper, 'tea' with coffee or even 'bath' with shower. Aslong as the sketch is different in some relevant way to the answer.

The artist does not draw the answer. Instead they sketch an image that is a play on the word. For example if your word is 'armchair' you could draw a chair with arms, or a chair shaped like an arm.

NTS is also a pun but it's more of a letter play usually having the words in-on-or-over in the word. Like M-in-T would be Mint.

The artist does not draw the answer. Instead they sketch something that sounds like the answer. This should only be for one word soundalikes, otherwise it is a pun.

The image, answer or part of the sketch is drawn upside down.

The artist draws the word as it would appear in an early iPod advertisement. This generally entails a silhouette drawing with a colorful background and an iPod somewhere in the picture. 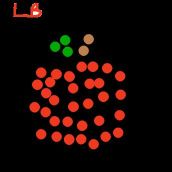 The word drawn contains the word that will match. i.e. draw bicycle for icy

The word drawn matches the first 4 letters of the word that you need to guess... the rest is up to you!

A good one for shorter words. Do multiple draws, take the first letter of each draw to make your word, you could even BP it.

Draw the bare minimum possible to convey your word

Please do not be offended when the guessers act like n00bs too, it's all part of the fun.

I didn't make Mish Mash up. It has been around for a few years now, but the original website no longer has the rules on it.